Story sample: Back to the Garden 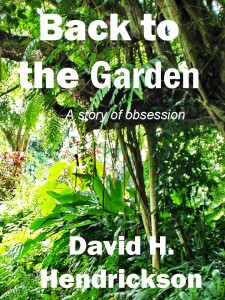 Available for 99 cents in all electronic formats on Smashwords, Kindle, Barnes & Noble, Sony, Apple, Kobo, and many others.  Published by Pentucket Publishing.

“Are you not the firstborn?” the demon asked.  “Should not all that is your father’s be yours?”

Cain dug his fingers into the rocky soil, grasped a weed by its roots, and tore it out.  Why did the demon torment him with these questions?  Cain crawled to the next weed, his back aching, and to the one after that until he reached the end of the row.  Only an hour of light remained and the fields stretched out for a far as the eye could see.  He wouldn’t finish in time.

“Was not your sacrifice as good as your brother’s?” the demon asked.  “You work the soil; he tended flocks.  Did you not both give of the fruits of your labor?  Should not both of you have been blessed?”

Cain, clad only in a loincloth of animal skin, moved to the next row.

The demon followed.  “Why should the fat of the lamb be more pleasing than your husks of corn?”

Cain ripped out the next clump of weeds and flung it aside.  His muscles glistened with sweat.

“If you had sacrificed to me,” the demon said, “I would have looked on it with favor.”

The demon, short and squat with eyes of darkest black, spread his hands wide.  “Your God cursed you, not I.  He cursed your mother and father with temptations they could not bear and then cast them out.”

Cain grasped a rock and used its sharp point to tear another clump of weeds out of the stony ground.

The demon bent close.  “Was it not your God who caused you to spill your brother’s blood?”

Cain saw his brother’s smile upon receiving the blessing and felt again the sting of his own rejection.  Rage surged through him.  “Go away!”

“Answer me this and I will leave you alone,” the demon said, a smug smile upon his lips.  “Why doesn’t your God want you to live forever?”

Cain stopped his work.  Live forever?  He wiped the sweat from his brow.  “Only God and the angels live forever.  Man returns to the dust he is made of.”

“Did not your parents tell you of the Tree of Life?”

Cain stared into the demon’s black eyes.  “I know of only one tree, that which my mother and father did partake of.  The Tree of Knowledge of Good and Evil.  I was told of it but once, upon becoming a man, and then was forbidden to ask of it again or to go near the Garden.”

A bemused look came over the demon’s face.  “But did you obey?”

Cain did not respond.

“You could no more stay away from the Garden than could your parents resist the fruit.  Whatever is forbidden becomes beguiling.  Your god loves to tempt you, is it not so?”

Cain could not disagree.

“Your mother and father almost became gods themselves, knowing good and evil, needing only the fruit of the Tree of Life to live forever.  But they feared your god and hid from him.  He cast them out and set Elasiri, the flaming sword, and cherubim to guard the entrance so he would maintain dominion over them.”  The demon paused.  “They could have been gods.”

Cain looked at all he had toiled over and all that remained.  He could have been the son of a god, a god himself, eating the fruits of the Garden instead of laboring in the stony fields from earliest light until the fall of darkness.

“You can still be a god,” the demon said.

“How is that so?” Cain asked.  “I am the lowliest of men, the murderer of my brother.  My parents will not even speak of me.”

“Sacrifice to me the fruits of your labor and reject the god of your father as he rejected your sacrifice.  Then I will provide you a way into the Garden.  You shall feast from the Tree of Life and never die.  You shall never want.  You shall be a god.”

Cain could not speak.  How could this be?  After a time, he asked, “But what of the cherubim and the sword of fire?”

“I will provide a way.”  The demon drew close, smelling of fire.  “Would you not be a god?”

Jula had feared Cain even when he was a boy, quick to anger, the bitter seeds sown of the hard man he would become.  Now heavy with their second child, she feared him still.

Flames from the torches flickered, casting shadows on the moss-covered walls of the cave.  It was long past nightfall.  Where was Cain?  Was his blood now spilt in the fields?  Could a wild animal have torn him asunder?  Her heart would not cry out for him the way it had for Abel.  It might not cry out for him at all.  She felt the roundness of her belly and drifted off to sleep.

Jula awoke with a start when Cain appeared in the mouth of the cave, smelling of fire and smoke.  She sprang to her feet.  How much time had passed?  Where had he been?  She held her tongue.

Jula felt a pang of fear.  A triumphant look was upon Cain’s face.  What did he want with the boy?

She went for Enoch, navigating the labyrinth to the place where he lay sleeping upon a bed of straw.  She shook him awake.  “Your father,” she whispered.

Enoch rubbed his eyes.  He looked so much like Cain had at this age, slight but with the promise of a strength that would come in years.  Though only seven, he could already work the fields almost as well as she.  Yet he shared none of his father’s rage, accepting their hardships without a word of complaint.

When Jula returned to the cave mouth with Enoch, a cry escaped from her mouth.  Behind Cain stood a demon, short and squat, hiding something behind its back.

An overpowering sense of evil flooded the place, making her feel unclean.  Its stench filled her nostrils.  Foul echoes rang in her ears.  The cave had grown cold.

Cain’s jaw hardened.  Anger flashed in his eyes.  “From this day forward, we will serve my father’s god no more.”

Jula couldn’t speak, couldn’t breathe.  Turn their backs on the Lord God Almighty?  It was . . . unthinkable.

“He has cursed us all.  He cursed the ground where we toil.”  Cain looked upon Enoch.  “Is not the ground cursed, my son?”

Enoch, who had begun trembling as soon as they came upon the demon, nodded, trembling no more.  “Yes, father, it is cursed.”

Cain turned to Jula.  “He has cursed you with the agony of childbirth–”

“—an agony I count a blessing,” Jula said.  She rubbed her arms, trying to warm them and rid herself of the unclean feeling.

“Silence!”  Anger filled Cain’s face.  “My father’s god cursed my offering while he blessed my brother’s.  My father’s god caused me to spill my brother’s blood and take on the enmity of my mother and father.  Why should I offer sacrifices to one who has cursed us so?”

“Is this mark in his image?”  Cain pulled aside his hair to show the blood red scar placed upon his forehead after he killed Abel.  It was a mark to prevent vengeance taken upon him, but whenever he touched its rough surface or saw it as he gazed into a pool of water, it told Cain that God had set him apart from all others.  “It is my father’s god who has cursed us and so I have cursed him.  My house and all those in it curse him.  This house will serve another.  Enmity shall be between this house and our father’s god.”

Jula pulled Enoch close.  She fought for words but found none.

“We shall be like gods ourselves,” Cain roared.  “We shall live forever and never want.”

Jula looked to the demon.  Its foul eyes gleamed.  “What have you done?”

(The full story is available for 99 cents in all electronic formats on Smashwords, Kindle, Barnes & Noble, Sony, Apple, Kobo, and many others.)