Story sample: All Over Again 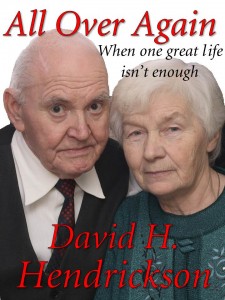 Walter and Edith have lived a satisfying life together. But an anonymous fiftieth anniversary gift offers a chance to be twenty years old all over again.  For one of them.

A dark-edged fantasy by award-winning author David H. Hendrickson. For more information about his work, go to hendricksonwriter.com.

Edith shook her head as Walter hobbled to the dining room table, huffing and puffing, and rested the second load of presents down.  He slid his bifocals up the ridge of his nose, took out a handkerchief, and wiped off the sweat.

“Dear, let me help you,” she said, knowing already the answer but needing to say the words anyway as part of their give-and-take.

“I’m not dead yet.”  More beads of sweat formed on Walter’s wrinkled forehead.  The stubborn old coot was going to have a heart attack, but he wasn’t about to let a woman do what he considered man’s work.  “I tell you, though, I sure would like to be twenty again.”

That again.  If she had a dollar for every time he’d said those words, she’d be able to buy a new TV and not one of the cheap ones.  He never stopped.  She looked at the brown cuckoo clock on the wall and thought that even though the thing hadn’t worked for decades, now might be the time for the bird to pop out and add its commentary.

“Walter, not today,” she said.  They’d just driven back from the hall where they’d celebrated their fiftieth wedding anniversary with over two hundred friends and family.  “Be happy with what you’ve got.  We’ve had a good life.”

“I know.  I’d just like the chance to do it all over again.”

As he headed back outside for another load, Edith shook her head.  Did he think she wouldn’t like to be young again herself?  Who wouldn’t?  But what good did it do to obsess over the impossible?  Geez Louise, give it a rest and be happy.

Walter lumbered in with a bag filled with envelopes.  “This is it,” he said, less out of breath this time.  “You want to open them now?”

“Whatever you want, dear.”

He looked out the picture window that overlooked their immaculately groomed back yard, a wistful look on his face.  He remained silent.

Walter smiled in that boyish way he’d never grown out of.  “I’d still like to be twenty.”

She set a bottle of champagne in a silver ice bucket engraved “Edith and Walter” and they began opening the presents, stopping only to field congratulatory calls on the black rotary phone.  After they’d gotten through all the packages and most of the envelopes, her stiffening fingers opened one and a card slid out.  The lettering was in a fanciful script and embossed in gold, making it look more like a formal invitation than something placed inside a gift card.  It read:

Sip at the fountain of youth!

Edith flipped it over.  The back read:

Place this under your pillow tonight and erase fifty-one years.  Sample our 24-hour trial, then decide.

Good for one permanent passage.

Edith looked up.  “Is this your idea of a joke?”

Walter frowned.  “It’s as if someone was listening to us.”

“Must be one of your buddies,” she asked.  “You talk about this to them?”

Edith took his hand in hers, felt its clammy touch, heard the wheeze of his breathing quicken.  She turned and saw the hunger in his eyes.  “You don’t really believe this, do you?”

“Of course not,” he said, trying too hard to appear nonchalant.

“Good for one permanent passage?  One.”

He shrugged.  “What does it matter?  It’s impossible.  A joke.”  But he averted his eyes and his hands shook even more than usual.

After a long silence, he said, “It’s only a joke.”

An icy chill stabbed her gut.  “What a sick, sick gift.”

Sunlight streamed through the window.  Edith lifted her head off the pillow and looked at the nightstand clock.  Quarter after seven.  Behind her, Walter snored.

Life was good.  Even if Walter could be a piece of work sometimes.  What husband wasn’t?  All four kids had made it yesterday for the big event–she still thought of them as “the kids” even though they all were now in their forties–and for Sue and Diane that had required flights from the other coast.  Too bad they had to fly right back, but it had been great to see them again.  And the grandkids, of course.  She wished they all were closer, but you couldn’t have everything.  She was content, unlike the fool snoring his silly head off behind her.

She yawned and stretched, then rolled over.

She almost screamed.  Would have if she’d been able to breathe.

A young man lay beside her, mouth open, skin so very smooth, his sandy hair askew on the pillow.

Eyes wide, she held her breath, forcing herself not to make a sound.  Her heart pounded so hard it felt like it might punch a hole in her chest.

She recognized the curve of that nose, the light almost imperceptible scar just above the eyebrow where Walter had gotten stitches as a boy, the discoloration of the one incisor amidst otherwise bright, white teeth.  That incisor with the dead nerve had caused Walter so many problems leading to a root canal even before the kids were grown.

What on God’s green Earth was going on?