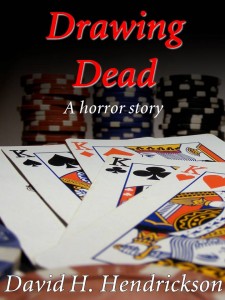 Smitty sees dollar signs when his latest mark maneuvers a wheelchair up to the poker table. But the stakes in this game run higher than Smitty ever imagined. A memorable horror story.

The mark had to be on chemo, all skin and bones without a hair on his head.  His black, long-sleeved shirt hung limp on emaciated shoulders and arms.  With a skeletal right hand, flesh stretched tight across knobby bones, he toggled the lever on his wheelchair and swiveled into place at the poker table.

Smitty knew that others in his shoes might show weakness and give the guy a break, but Smitty hadn’t survived until the ripe old age of eighty-five throwing pity parties.  Winners win; losers lose.  Smitty knew which one of those he was, and if the cadaver in the wheelchair wasn’t a loser then Smitty didn’t know a flush from a full house.  Besides, the mark’s name was Jules Goldman.

“Curry couldn’t vouch for you,” said Smitty, his once broad shoulders now hunched with age.  “He died a few nights ago.”  Smitty leaned his cane against the table and adjusted his glasses.  “But even a blind man can see you’re no cop.”  He lowered himself into the chair across from Goldman, the other eight seats about the oval table empty.

Stacked in front of both men were black, hundred-dollar chips, precisely 403 each, the latest in a long list of superstitious requests Smitty had received over the years.  Goldman gave off an unpleasant odor, but for 40,300 dollars Smitty would endure a lot worse.

For the next half hour, he manipulated the deck with nimble hands that belied their wrinkles and liver spots, setting the mark up for the kill.  He fed Goldman winners, folding to re-raises to foster aggression.  Here in the privacy of the high-stakes room, the only other eyes were those of poker legends framed in autographed photos upon the paneled walls.  Those mouths wouldn’t be talking, and the surveillance cameras mounted in each corner were for only one person’s protection and that wasn’t the mark.

After Goldman’s fold put them coincidentally back to even, Smitty sprung the trap.  He dealt himself two aces and Goldman two kings, bet a thousand dollars, then smooth-called the re-raise to five.  If the hook wasn’t firmly embedded before the flop, the three community cards did the trick: the ace of diamonds, king of hearts, and an irrelevant five of clubs.  Three aces against three kings.  There wasn’t a poker legend smiling on that wall who wouldn’t lose their entire stack holding those kings.

“All in,” said Goldman, pushing his stack into the middle.