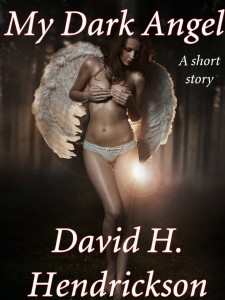 Paul can resist Angela’s seduction attempts for only so long. With Angela, going all the way takes on a whole new meaning. A sensual horror story.

The bonfire roared, its blazing logs piled high, sending flames shooting twenty feet into the night air.  Pastor Dave, all elbows and a thick mop of black hair, launched us into “Give Me That Old-Time Religion.”  We sang and clapped, and next to me Jonas Olson, ever the country bumpkin, stomped his feet.

I gazed into the fire and wondered how many of my fellow campers were destined for Hell’s eternal flames.  I’d been coming to Long Lake Gospel Camp long enough to know that only a handful of us teenagers were here for that old-time religion.  The other two hundred or so had come to socialize and to enjoy the recreational facilities: the hundred yards of shoreline, the ball field, the basketball court, and the horseshoe and volleyball pits.  Or perhaps they’d been sent by parents desperate to get rid of them for a week.  Their spiritual nonchalance was a sign of the end times, not far behind the ban on prayer in the schools, the Vietnam War protests, and the pill.

We got to the verse “Makes me love everybody,” and Pastor Dave yelled out, “Grab the hand of the person next to you.”  I extended my left hand to Jonas.  On my right someone stepped up and clasped the other.

She smiled, teeth glistening even in the bonfire’s meager light.  Her blue eyes held mine for an instant, then shyly looked away.  She smelled of lilacs.  Her auburn hair flowed down past her shoulders.  I didn’t realize I’d fallen silent until she nudged me and hissed, “Sing!”

Halfway through the final chorus, a knot in one of the logs exploded with a bang.  She yelped and grabbed my arm just below the elbow, her fingernails, surprisingly sharp, digging hard into my skin.  An instant later, she released her grip, leaving behind red splotches that soon sprouted tiny droplets of blood.

Her hand went to her mouth.  Her pale blue eyes widened.  As all around us everyone sang, she bent and softly kissed the injured flesh.  Her tongue flickered across the skin.  She kissed it again, leaned close to my ear, and whispered, “All better.”

I looked nervously about, certain that I would hear words of reproach or feel a tap on my shoulder, but no one seemed to have noticed.

Was this how girls in the outside world acted?  My parents had home-schooled me, and all my social interactions were within my father’s church, a place where women wore neither makeup nor jewelry lest they be considered worldly.  This, however, rivaled the scandalous behavior of Marie LeBlanc, who last year had entered and won the Miss Cumberland County beauty pageant.

Hearing Pastor Dave speak my name, I flinched, then realized he’d merely asked me to close in prayer.  His face showed no condemnation, no hint that he’d seen anything.  My words sounded hollow and trite, but my fellow campers paid no heed and stampeded to the snack bar as soon as the word amen left my lips.

She inspected my arm.  “I’m really sorry.”  Her pale complexion shimmered in the flickering light.  “You’re Paul Kautz, aren’t you?  Your father is the Superintendent?”

Relieved to see Pastor Dave heading in the other direction, I nodded.

Dumbstruck, I stared as she turned and walked away, hips swaying hypnotically.  In the distance, she moved out of one floodlight’s illumination and into another’s until the darkness consumed her.

I tossed and turned in my sleeping bag for a time, her words echoing in my mind.  A devil at night.  God had called me to Bible college in the fall and the mission fields thereafter, but His will for me this week could not have been made more clear.   Angela’s soul was precious in God’s sight.  And if it was precious in His sight, so too would it be in mine.

I awoke before sunrise, as was my wont, slipped out of the ramshackle, two-story boathouse where all the guys slept and headed for the dock.  An array of floodlights illuminated my way as I passed rows of picnic tables, a shuffleboard court, and the horseshoe pits.  A bat circled overhead.

I took off my shoes and socks, rolled up my pant-legs, and dangled my feet in the cold water.  The dock often held thirty or forty people during recreation time, but here I was alone with my Maker, my leather-bound Bible beside me, communing with Him in the peaceful beauty of His creation.  I drew strength from His presence.  The waves lapped against my legs.  Far in the distance, an outboard motor sputtered to life.

Darkness upon the face of the deep.  With the floodlights behind me, I could see the raft thirty yards away but nothing beyond.  The other side of the lake, maybe a half mile or so in the distance, remained shrouded in night.  I thought of my Creator looking out over such a shapeless void and saying, “Let there be light,” words that set into motion the wonders that led to Adam and Eve, and eventually, to me.  Softly, I began to sing “How Great Thou Art” and wondered at man’s insignificance.

When I got to the chorus, I felt a chill at a sudden dissonance in my voice.  The rich baritone God had blessed me with had won four straight district and regional talent competitions.  I’d always fallen short at the nationals, but it hadn’t been for lack of proper pitch.  I stopped.

Hearing a voice behind me continue, I cried out, scrambling to my feet.

Angela smiled sweetly.  She wore short-shorts and a thin flowered blouse.  “Did I scare you?” she asked.  “I’m sorry.”

My heart pounded.  “Where did you come from?”

She touched a soft hand to my arm and pointed to the scar her fingernails had left the night before. “Are you okay?”

I couldn’t help noticing that she wore no brassiere.  Even in the faint light the outline of her breasts was pronounced.

She smiled, those white teeth glistening.  “I’ve heard the frothing at the mouth takes a few days.”

She looked at me quizzically.

A pout came over her lips.  “You don’t think I look nice?”

“You look very nice, but . . . .”  For a moment, I wished I was just another camper and could leave discipline to the counselors.  But I didn’t shirk my duty.  “The shorts are a little, well, too short.  They’re supposed to be within two inches of the knees.  And you seem to . . . well, I couldn’t help noticing that you seem to have forgotten . . . forgotten something.”

She looked at me confused.

Frowning, Angela tucked a thumb into the top of her short-shorts, peered down inside, and brightened.  “Got my panties.”

With a devilish grin on her face, she moved closer.  Forgetting where I was, I stepped back, lost my balance, and teetered on the edge.  Angela grasped onto one arm and held on, shrieking as the other windmilled.   Together we splashed into the lake.  The shock of the cold water hit; my foot touched the sandy bottom.

As soon as my head cleared the surface, Angela splashed water in my face, whooping with delight.

Mindful of how easily sounds carried over the water, I whispered, “Not so loud!  They’ll hear us.”

She splashed again.  “You’re no fun.”

Images of Pastor Dave or one of the counselors arriving flashed before my eyes.  “Let’s get out of here before we get in trouble.”

With a pout, she gave me a half-hearted backhand splash, swam to the ladder, and climbed onto the dock.

I got to the ladder’s top rung and froze.

Angela stood facing me, shivering, wringing the water from her long hair.  Her thin blouse, plastered to her pale skin, exposed her breasts in all their beauty, her nipples, hard and dark.