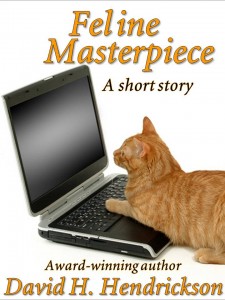 A cat that writes stories? Impossible! Her owner, Josh, can’t believe his eyes. But he believes when a pretty girl falls for him because of the sensitivity she reads in “his” stories.

While cars, taxicabs, and busses honked fourteen floors below, Josh Langfeld struggled with his novel.  He sat at a desk cluttered with sports magazines, overdue DVDs, and empty beer cans.  He swiveled to his left to watch the TV.  He played a couple video games.  He went to the bedroom mirror and checked his jet black hair, recently cut at Le Salon de Louis, then stood sideways to examine his washboard abs.  He checked to see if there was anyone online to chat with.

He wondered if he should go back to trying to be a rock star.  Or maybe consider acting even though he couldn’t memorize anything longer than a new pickup line.  Writing was hard.

Finally, the muse cooperated.  As Josh’s new cat, Lucky, stared at the words as if they were miniature mice scrambling across the screen, Josh typed:

Julia eschewed obfuscation and screamed with petulant bellicosity.  “How could you do this to me, Darren?  I’ll never love anyone else again!  My life is over, Darren!  Over!  It’s over!!!!!”

Josh sank back in the chair with satisfaction.  That was pretty good, he thought.  Eschewed obfuscation.  His vocabulary work was paying off. And the five exclamation points at the end of the dialogue were a nice touch.  Editors and agents had treated his novel proposal as if it were the Ebola virus, but they’d live to regret it.  This one was a keeper.

He’d be like Stephen King or that Harry Potter woman.  Famous.  People would line up around the block for him to autograph his latest bestseller.  Women would throw themselves at him.  He’d have to watch out for paternity suits, but that was one of the prices of fame.  Would he do Leno first or Letterman?  Maybe, if the sex was hot enough, Howard Stern.  Oprah for sure.

Lucky’s orange-red fur bristled and her back hunched.  She pounced.  Her front paws stepped on keys that highlighted the entire story.  With a back paw, she pressed “Delete.”

The story disappeared. A blank screen stared back at Josh.

Lucky scampered across the keys.

Josh swatted her aside, sending two empty cans clattering to the floor.

He stared at the words on the screen.

Lucky licked her chops, her pink nose twitching.  She walked across the keyboard again.

I can’t do any worse than your shit.

Josh watched spellbound as Lucky padded back and forth across the keyboard, somehow using her paws–or perhaps it was her claws, he couldn’t tell–to select keystrokes that combined to create not only grammatical sentences but actual scenes in a story.  Lucky often stopped to think, at times not moving for minutes before resuming.  She also hacked up a few literary hairballs and had to edit the offending passages, her back arching and fur standing on end, but the story emerged line after line, page after page.

Only after nearly an hour of dazed befuddlement did Josh realize that his writing days were over.  Fame awaited without him having to so much as lift a finger.  As the owner of the world’s first writing feline, he’d be on the cover of Time and Newsweek, the lead guest on all the talk shows.  There’d be a world tour.  London.  Paris.  Rome.  He’d have to beat the women off with a stick.  Best of all, he’d never have to write another word again.  He leaned back and cracked open a beer in celebration.

When he finished the last drop, he rocked forward in his chair and fumbled in the bottom desk drawer for his camcorder, a top-of-the-line Sony HD with adjustable undercranking and overcranking, instant auto-focus, and enough capacity to record for just about forever.  He popped the lens cover off and–

With a feral snarl, Lucky sprang at him.  They tumbled to the floor’s thick shag carpet; the camcorder flew out of his grasp.  Lucky raked her claws across his chest.  Jagged holes appeared in his T-shirt.  She scrambled toward his face, radiating heat and the smell of a savage beast.  Josh ducked, throwing up a forearm.  Lucky’s claws tore open angry, red gashes.

Josh threw her off, sprang to his feet, and backpedaled.  Lucky took one step forward, teeth bared and hackles raised, then held her ground, hunching her back.  Her green eyes, so pleading when he’d gotten her a couple weeks ago at the animal shelter where his latest girlfriend worked, now looked wild and filled with hatred.

Josh backed slowly into the bathroom.  He closed the door.  His forearm stung.  Blood trickled from the deep, red tracks of Lucky’s claws.  He double-checked his face in the mirror.  Not a scratch.  Josh shuddered at what might have been.  That had been a close call.

Was the cat rabid?  He’d only gotten the damned thing to impress Marisa, show her he had a sensitive side.  She said it had gotten all its shots and there’d been no signs of rabies.  Of course, there’d also been no signs that the damned thing could write stories.  Perhaps, Josh wondered, the same abnormality that had bestowed the ability to write had also triggered this attack.  All the more reason, he figured, to get the writing documented on film.

Josh cracked open the bathroom door and peered outside.  The clicking of keys sounded from out by the computer.  He opened the door wider, tiptoed out, and poked his head around the corner.

Lucky stepped on a few more keys, hopped off, then looked at him.  Her eyes still glowed with fury.  She lifted a paw and pointed to the screen.

Josh inched toward the desk, his eyes never leaving hers.  Lucky had opened a second document and written in a large font.  I could have gotten your face if I wanted to.  Pull that stunt again and I won’t miss.  No cameras!

I won’t be part of your freak show.

“It won’t be a freak show.  You’ll be a celebrity.  The cover of People magazine.  On all the shows.  Oprah will go gaga over you.”

Josh couldn’t fathom it.  The damned cat could have the whole nine yards and was turning it down.  “You don’t want to be on Oprah?  You don’t want the cover of People?”

I want my work judged on its own merits.  I don’t want it to be “great for a cat.”  I want it to be great.  Period.  No qualifiers.  Now leave me alone.  I’ve got a story to finish.

You’re not used to hearing the word “no” much, are you?

It’s always about you.

Josh was quiet for a long time.  “You know,” he finally said, “I liked you better when you were dumber than me.”

The correct wording is “dumber than I.”  The pronoun is a subject, not an object.  And just for the record, I’ve never been dumber than you.